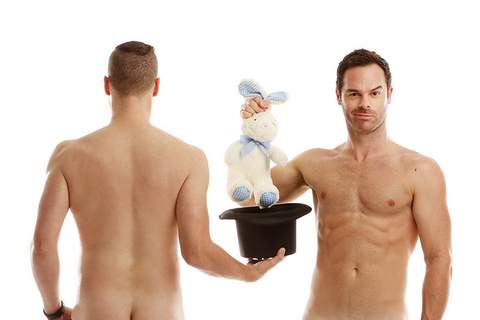 Things you've never seen before in a magic show

Mention the words "magic show" and some people might say that they've seen it all before. Well - - - you haven't seen this! Mike Tyler and Christopher Wayne are touring as The Naked Magicians / The Naked Magic Show.

How did you come up with the idea for the show?

The original concept of a naked magic show was discussed with Simon Painter, the creator of the biggest magic show on the planet, The Illusionists. After having a beer and a chat with Simon outside the Sydney Opera House in Australia, we designed the world’s first naughty magic show along the lines of the movie, Magic Mike, but with real magic. The show is the perfect mix of incredible magic, non-stop laughs, and very cheeky nudity.

We have a large nudist / naturist readership. Are either of you nudists or naturists?

Before getting on stage to perform this show in Feb 2014, neither of us would get naked in public or in front of large crowds. It’s amazing how entertaining a crowd of 1,000+ people makes you feel comfortable getting naked. Getting our clothes off is now our favourite thing to do together… we’re still just friends though.

How have audiences responded?

We have a large gay readership. Are you comfortable with gay audiences?

Our show is a celebration of sexuality in all forms. We aren’t just comfortable with a gay audience, we 100% welcome it! In Australia we performed at our state’s biggest annual LGBT event, The Queens Ball. We’ve also been featured on the front cover of Australia’s biggest LGBT magazine and discussed the role we play in being “straight allies” for equality. The majority of our audience tend to be straight females and gay men which we embrace.

What are your upcoming tour events?

At present we have plans to tour approx. 35 cities across USA, reaching over 20 states from April through to August 2016. We want to show our naked bodies to as many Americans as possible, and this show is the only legal way we know how.

Tell us how the show works.

Without giving too much away, we literally strip away the magic stereotypes like the top hats, capes, and bunny rabbits to deliver the funniest, cheekiest, and naughtiest magic show ever! We start full dressed and slowly lose our clothes throughout the night with all the trickery themed around those naughty topics you’d normally only discuss among friends after a few wines. It’s a non-stop rollercoaster ride, so if you’re expecting a tame show with family-themed magic, this show is not for you.

What is it that you love about magic?

Magic for me isn’t about the trick itself or fooling someone, but instead it’s about taking an audience on a journey and allowing them to experience something truly incredible. I love that magic gives us the platform to deliver that and the opportunity to travel the world doing what we love. In The Naked Magic Show we use more than just magic to give the audience an incredible night that’ll leave them with a sore jaw… from laughing!

Background Information on Christopher and Mike

As co-creator and co-star of The Naked Magicians, Christopher has a wit quicker than Kim Kardashian’s first marriage and often confused as a Macklemore look-a-like. He is proud owner of a freakingly long tongue and an entertainment resume as impressive as his broad climbable shoulders.

Originally known as the “clothed” magician on Channel 10’s long-running kids TV program, Christopher then became the first Australian magician in TV history to have his own TV series, “More Than Magic” which aired in Australia, New Zealand, England, and USA. Christopher also spent 4 years as the head comedy writer for Queensland’s favourite breakfast radio show “B105” and continues regular guest spots on several radio stations in Australia.

Christopher is a passionate and outspoken advocate for LGBT rights, and is an ambassador for the Royal Children’s Hospital Foundation in his home city of Brisbane, Australia. He is happiest on stage in front of thousands of fans with his sleeves up and pants down!

Don’t be fooled by his nice guy image, Christopher is more naughty than nice.

The complete package of funny, athletic, sexy and good with his hands… Mike Tyler is perfectly suited to be co-creator and co-star of the world’s naughtiest and funniest magic show.

Getting his gear off has always come naturally to Mike who was a competitive swimmer competing at the National Championships and Pan Pacific Games… keep an eye out for his incredible physique and sporty tan lines on stage as proof! After attending school under scholarship, he completed a university degree but soon realized his dream of becoming an entertainer with a quick wit, modest ego, and incredible sleight-of-hand skill.

At the age of 31, Mike is in a full time relationship with his career, adventure, and travel. He is considered one of Australia’s favorite and most successful entertainers performing over 250 “clothed” shows for the biggest companies and sporting teams in the country. He has performed countless times to millions of people on TV in Australia, New Zealand, and USA while performing magic in 10 countries around the world.