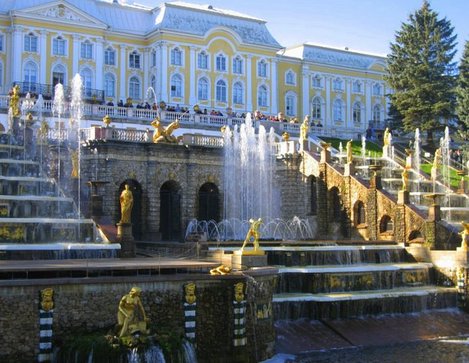 The beautiful Star Princess departed Ft. Lauderdale on April 24, 2010 and set sail for the Baltic with 2,590 passengers who had the option of 18 or 28 days aboard.

After five relaxing days at sea crossing the Atlantic, we were happy to stop at our first port in Ponta Delgada, on the island of Sao Miguel, Azores which Princess Cruise Lines claims was once thought to be the tip of the lost continent of Atlantis! Noted for the two scenic crater lakes at the top of the mountains, this island is known for its’ pineapple farms, old world villages, wineries, architecture and whale watching. We chose a tour of the blue and green crater lakes, a pineapple farm where we tasted pineapple liqueur, and a walk past historic city highlights.

Our next port of call was Lisbon, Portugal  As we cruised into the port we passed the iconic Monument of Discovery which pays homage to navigators. Excursions include Segway tours, bus tours, walking tours, and winery tours as well as trips to Fatima and Sintra. We chose a visit to Sintra – a UNESCO  World Heritage Site filled with nineteenth century romantic architecture including a fairy tale castle.The drive also gives a chance to view Guincho Beach and the fishing village of Cascais.

Vigo, Spain was our third port of call. Formerly a Roman bathing resort site, it is a picturesque Spanish city. We chose a tour to nearby Santiago De Compostela. Religious pilgrims walk or bicycle hundreds of miles to this city to have their sins forgiven according to our tour guide. Santiago De Compostela is filled with religious architecture and is considered a Spanish national monument.

After a short cruise to England, we approached the port at Dover. We recommend you plan to get up early to view and photograph the stunning White Cliffs of Dover as the ship approaches the port.  We chose to tour Dover Castle and were able to take a shuttle from the port for a minimal fee. Dover Castle contains ruins including a tower dating back to the first century!  Others tours include Leeds Castle – home to six queens, Canteberry – England’s most famous cathedral town, and London.

Our next port of call was Le Havre, France. We chose to tour Rouen where Cathedrale Notre Dame de Rouen is located and where Joan of Arc was burned at stake in 1431. Other tours include Paris (a 3 hour drive) and Normandy with its’ D Day Landing beaches.

Zeebrugges, Belgium was our next port and we chose to tour nearby Bruges – one of the best preserved medieval cities in Europe. It was a wonderful experience and we recommend it for everyone. Many of Bruges’ buildings date back to the 1400s and the Madonna and Child by Michelango is in the Our Lady’s church located in the old city section of Bruges. With canals, an incredible city square, and beautiful architecture everywhere you look, it is a photographer’s and sightseer’s dream. Other tours include Brussels and Ghent.

The ship made two stops in Oslo, Norway with a week in between. It snowed on our first visit. We chose to visit the Gustav Vigeland Artistic Sculpture Garden which is filled with hundreds of nude sculptures depicting the complete human life from birth to death. It is an incredible site and artistic accomplishment. Tours also include Holmenkollen – the cradle of ski jumping and site of the 1952 Olympics, and the Oslo Open Air Museum with its’ collection of restored farmhouses and the village of Christiana.

Rotterdam, Netherlands is known for its’ windmills.  We chose a tour of Kinderdijk – home to nineteen original windmills. It made for some amazing and unique photos. Other tours include Amsterdam, Ghouda, and easy Rotterdam.

Our next stop was in Gothenburg, Sweden which was founded in 1621 and is the second largest city in Sweden. The city streets are easy to navigate on foot even though there is an incredible amount of pedestrian, bicycle, automobile, bus and trolley traffic. We chose a tour through the city’s canals in a Paddan boat which was quite an adventure because, as we passed under low bridges, everyone had to get down on the floor! The Gothenburg City Pass allows access to many attractions for one price. The city is filled with museums of all types.

Our next scheduled stop was Copenhagen, Denmark but due to heavy fog and zero visibility many passengers chose to enjoy a day on the ship.  (This was also where the 18 day cruise passengers ended their cruise and new passengers came aboard.) Copenhagen is home to 500 year old homes, Kings New Square, Tivoli Gardens, the Little Mermaid Statue, Rosenberg Castle and Church of Our Lady. It is also the final resting place of Hans Christian Anderson.

Fog played still another part in our next scheduled port. Stockholm, Sweden was fogged in so heavily that the captain had us drop anchor 60 km upriver at the small town of Nydersham. The ships fog horn was sounded every few minutes for the entire night. Stockholm highlights include the Vasa Museum which contains the warship Vasa  (the oldest fully preserved ship in the world), city hall where the annual Nobel banquet is held, and Old Town Gamla Stan with cobblestone streets and building from the 16th century.

Helsinki, Finland was our next stop. It is Finland's capital and its’ “skyline features a dramatic blend of classical architecture and clean modernism, with Russian and Swedish influences throughout.” We chose to tour 18th century Suomenfinna Fortress which is called the Gibraltar of the North. Other tours include the best of Helsinki, the Savijarvi Farm, Finnish Cuisine and Porvoo.

Our ship arrived in Saint Petersburg, Russia with the passengers very excited about spending two entire days exploring this once-forbidden destination.Their new port facilities are very modern and prove their commitment of becoming a major tourist and cruise destination.

We chose to spend our two days with Red October Tours which specializes in providing tours to any size groups. You could be in a group of only 2 or 10! This is an incredible advantage as you move to and through some of the most famous St Petersburg sites including Peterhof Palace, Catherine’s Palace, Peter and Paul Fortress, St Isaac’s Cathedral, Church of the Savior on the Spilled Blood, Yusupov Palace and the world famous Hermitage museum with over half million pieces of culture and art from around the world.

Our port of call was Tallinn, Estonia with its’ medieval Old City, church spires and red-tiled roofs, Palace Square, and Toompea Castle. We enjoyed the Rocca Al Mare Open Air Museum which features costumed entertainers and a collection of 18th and 19th century rural buildings gathered from around the country and. Princess offers tours including Tallinn Walking Tour, Best of Tallinn and the Footsteps of Peter the Great.

The port at Gdynia, Poland is not far from Gdansk - one of the oldest, most important and beautiful cities in the Baltic. Gdansk is the home of St Mary’s Church – the largest brick church in the world which can hold over 25,000 worshippers. Gdansk is one of the amber centers of the world and shops are everywhere. We spent an enjoyable five hours walking the Old Town on our own and photographing the restored buildings. Princess offers a dozen excursions including the 13th century Malbork Castle, Gdansk, Gdynia and Sopot, Gdansk and The Solidarity Movement, and Easy Gdansk.

Our 28 day transatlantic cruise ended back in Copenhagen where many post-cruise tours are available as well.

The Princess Transatlantic 28 day Baltic Northern Europe Grand Adventure is an excellent way to experience northern Europe, the once forbidden Russia and the beautiful Baltic.