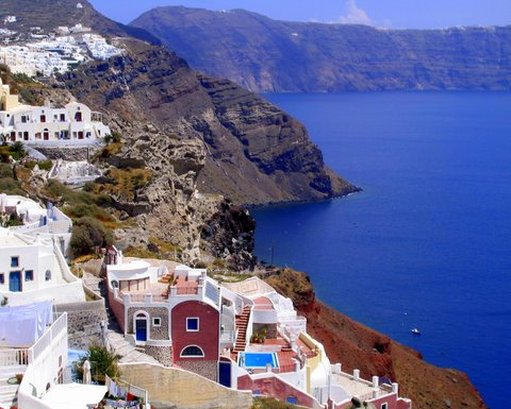 by Steven Skelley and Thomas Routzong

Greece has often been referred to as the cradle of western civilization. Its’ long dead philosophers, politicians and artists have influenced the entire modern world in spectacular ways. A twelve day Greek Isles cruise on the Star Princess is an excellent way to experience this amazing, world-changing culture.

The Star Princess is a beautifully designed ship that holds almost 2600 passengers and features a Piazza-styled atrium, The Sanctuary adults-only relaxation area, multiple swimming pools and hot tubs, and Movies Under The Stars. We had several passengers tell us that the Star Princess is their favorite ship of any they have cruised.

Venice, Italy – The Twelve Day Greek Isles cruise begins with two days right where you board the ship in Venice, Italy. Since Venice is known as one of the world’s most beautiful cities and so many sights are within walking distance of the ship, this gives you ample time to explore its’ small traffic-free streets which are great for walking.

For our excursion, we chose the “Gondola Ride, Doge’s Palace and Glass Show room.”  Our walking tour started in the square and proceeded through the heart of Venice. We toured Doge’s Palace where we observed the famous Golden Staircase, the Great Council Chamber and paintings by Tintoretto and Veronese. We crossed the 17th century covered stone bridge that is one of Venice ’s most photographed landmarks. The bridge links the Doge’s Palace with the old prison dungeons. We then boarded the sleek six passenger black gondola for an half hour cruise through some of Venice’s smaller, less crowded canals. Our tour ended in the Murano Glassware showroom giving everyone a chance to shop or spend time sightseeing in St. Mark’s Square.

Dubrovnik, Croatia – Dubrovnik is known as the Pearl of the Adriatic Sea. This walled city is a picture perfect medieval site that is sure to delight photographers.  We chose to enjoy an excursion called “A Taste of Croatia and Dubrovnik.” We visited the picturesque seaside resort city of Cavtat - a favorite destination for sailors and yacht enthusiasts. Our next stop was the beautiful, ancient, walled city of Dubrovnik with its’ medieval structures circling a maze of narrow cobbled streets. The Rector’s Palace, built in the15th century mixes both the gothic and renaissance styles and contains a vast collection of historical artifacts, paintings and furniture.

Corfu, Greece – According to Greek mythology, Corfu was founded by the god Poseidon himself. It is known for some of the finest coastal scenery in the Mediterranean. For our excursion, we chose “Leisurely Corfu.” The photo opportunities were endless during this tour. The streets were so narrow that our bus barely cleared the building by only a couple inches on both sides.  All other traffic had to stop and waited for us to get through. We drove past the New Fortress which is actually 500 years old. We viewed the Palace of St. Michael and St. George, the Esplanade and the Cricket Pitch, and eventually reached Paleokastritsa Village, a hilltop village overlooking six small coves nestled in the rugged coastline surrounded by groves of olive, lemon and cypress. This area is also considered to be some of the finest scenery in the entire Mediterranean and another highlight for photographers.

Katakolon, Greece - Katakolon is a small but ancient city overlooking the Ionian Sea. It is home to the  Museum of Ancient Greek Technology. We chose to explore this sleepy, fishing village of about 300 on our own. Katakolon is known as The Gateway to Olympia, the site of the original Olympic Games. Olympia lies in the valley formed by the Alfios River and is home to the Temple of Zeus where the gold and ivory Statue of Zeus, one of the seven wonders of the ancient world, was housed.

Athens, Greece – Over 3,000 years old, Athens is one of the world’s oldest cities. It was a center of philosophy, education and art and home to Socrates, Plato and Aristotle. We chose the “Acropolis, Ancient Corinth and Canal” excursion. The guided tour of the Acropolis began with a walk up steep steps through the Propylea. Next to the entrance is the Temple of Athena Nike.  Beyond the Propylea on the highest point of the Acropolis stands the Parthenon. This white marble temple was built in 477-437 BC. Standing on the Acropolis looking over the city is like nothing we ever experienced anywhere else.

We boarded our motor coach for a half hour drive to the heart of Athens where we passed many major sites. We stopped at the Eternal Olympic flame for a photo opportunity and then we visited a seaside resort for a Greek luncheon buffet. After a restful lunch break, we made our way to Corinth Canal. The canal is 76 feet wide and 26 feet deep originally planned by the Emperor Nero. We viewed the canal from a bridge spanning it’s banks 200 feet above the water. Ancient Corinth was once Greece’s wealthiest city and claimed a forum larger than Rome. The Corinth Museum has a large collection of antiquities unearthed from the city’s ruins.

Mykonos, Greece – Mykonos is an island comprised mostly of granite that rises to more than 1000 feet above sea level. In Greek mythology, it was the site of a battle between Zeus and the Titans. We chose to walk into town and explore on our own.  The views in Mykonos are stunning and attractions include the Mykonos Windmills (dating back to the 1500s), Little Venice (buildings on seas edge with balconies over the water), Paraportiani (the doorway through the Medieval stone city walls), and the Archeological Museum. Bring extra camera batteries and memory cards because Mykonos is also a photographer’s dream come true.

Over the last few decades, Mykonos has become a very popular gay tourism destination. It has been referred to as a gay "safe haven" by gay travelers. There are several gay and / or gay friendly clubs as well as beach areas that are predominantly gay. Some beaches are clothing optional.

Kusadasi, Turkey – Kusadasi is one of Turkey’s ancient ports. It is believed to have been founded in 3000 BC. We chose once again to walk into the city and explore on our own. After going through the Magnesia Gate entrance to the city we walked down the marble road to the ruins of the Roman Provincial Capital. There are many major sites to visit including the Odeum, the Celsus Library, the Temple of Hadrain, the Fountain of Trajan and the Great Theater which had seating for 25,000 and is believed to be the site where Christianity’s St. Paul preached to the Ephesians. (Street vendors call out to tourists offering hilarious items. One huge regret I have is not buying from the street vendor yelling, “Genuine FAKE Rolex watches - only $5.00!” That is honest advertising for sure – a “genuine, fake Rolex!”)

Rhodes, Greece – Rhodes is historically famous for being the site of The Colossus of Rhodes – one of the Seven Wonders of the Ancient World. This ancient city is a walled town with medieval buildings and streets going back to the days of the Crusades. For our excursion, we chose “Mt. Philermos and Rhodes Town.”  Mt. Philermos is a plateau rising 1,000 feet above the sea with great views of the surrounding valleys.  Perched on the top is the barrel-vaulted chapel of St. George which is dated from the 15th century. We had a guided walking tour of the old, walled, medieval city following the stoned paved streets and the famous Knight’s road which has been in existence since 408 BC and is just a small piece of Rhodes long history and rich heritage.

Santorini, Greece – Santorini is world famous for its’ white-washed buildings clinging to rock cliffs that plunge hundreds of feet to the dark, turquoise sea below. We chose “Santorini in a Nutshell” as our tour. Fira, Santorini’s largest town, is a village of white houses on steep volcanic cliffs. Accessible only by foot, Fita’s narrow cobblestone lanes lead uphill past shops, homes and cafes. A cable car can take you down to the old port to board your tender back to the ship if you choose. For the greatest photo opportunities, be sure to stop at the Mountain of Prophet Elijah. This is Santorini’s highest point towering 2000 feet above the sea. The Aghios Nektarios Church, with its’ blue and white façade, stone lattice work and an octagonal cupola is another fantastic photo opportunity as is Kamari, a fishing village famed for it’s dramatic, black sand beaches. Walking on the black sand beside the turquoise blue water at the ancient fishing port of Thera is another photographer’s highlight.

Naples, Italy - Naples is the third largest city in Italy and is called the gateway to the ruins of Pompeii, the Isle of Capri and the Amalfi Coast. This picturesque town sits on the cliffs overlooking the Bay of Naples and boasts stunning views, seafood delicacies and Limoncello - a tangy lemon Liqueur. Mount Vesuvius, the dormant volcano that destroyed the ancient cities of Pompeii and Herculaneum, is now a national park with many walking trails and a summit open to visitors. Naples’ Castel Nuovo is an impressive and imposing castle originally begun in 1279.

Civitavecchia, Italy – Civitavecchia, which means “ancient town,” is a port about two hours by bus from Rome. It is home to Forte Michelangelo, a huge 15th century fortress, and The Archaeological-Botanical Park of the Terme Taurine Baths which were built around naturally hot sulfur spring and include the Republican Baths from the first century BC and the Imperial Baths built by Emperor Hadrian around 120 AD. We chose to take the bus to Rome offered by Princess Cruise Line so that we could add an additional two days sightseeing Rome’s famous sites.

The Princess Cruise Line’s Greek Isles 12 Day Cruise is one of the best we have experienced and one we hope to experience again. The cultural significance, history and beauty of this part of the world is simply stunning.