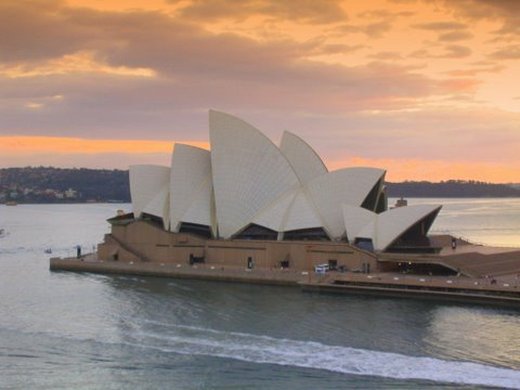 Australia, the only country that has a continent to itself, is world-famous for natural wonders, wide-open spaces, beaches, deserts, the bush and its famous outback. New Zealand, with its beautiful  landscapes, vast mountain chains, steaming volcanoes, sweeping coastlines, deeply indented  fiords, Maori culture and lush rainforests, is both a peaceful haven and and adventurer's playground. A 12 day cruise on the Sapphire Princess is an excellent way to experience these two extraordinary locations.


The Sapphire Princess was once the largest ship in the Princess line. Built in 2004, it has over 700 balconies and a passenger capacity of 2,670. The Sanctury (a relaxing retreat for adults) and Movies Under The Stars (a poolside theater) will be added in early 2012.

Auckland, New Zealand -The twelve day cruise begins in Auckland, New Zealand. We arrived early in the morning after a 13.5 hour flight from Los Angeles. Princess staff picked us up at the airport, delivered us to a local hotel lobby where drinks and snacks were available, and checked our luggage. We were given the choice to ride a bus or walk to the ship. Since it was not a long walk, we chose to explore some of the city.

There are many things to see and do in Auckland. The Auckland Museum is an excellent place to view artifacts from the unique Maori culture. The Sky Tower is the tallest man-made structure in New Zealand - towering 1,072 feet in the air. Countryside Wineries offer interesting tours. Shopping along the picturesque waterfront and visiting the Underwater World and Antarctic Encounter are great choices for pre-cruise activities.

Wellington, New Zealand - Our first port of call was Wellington (the capital of New Zealand.)  Wellington offers fabulous views of forested peninsulas, cliff-side homes and Victorian buildings. “Wonderful, windy Wellington” is sometimes extremely windy.  With its' winding streets and even a cable car, it is often compared to San Francisco.

One very popular excursion is "In the footsteps of the Lord of the Rings" in which you tour the locations where the movies were filmed. We enjoyed touring the Parliament Building where you can compare the 1897 General Assembly with the modern wing known as the “Beehive.” The Papa Museum of New Zealand highlights New Zealand’s past, present and future.  The cable car to the Wellington Botanic Garden gives you spectacular views of the city.

Lyttleton-Christchurch, New Zealand  - Lyttelton serves as the gateway to Christchurch. This ship docked right in the heart of this little port town. The Lyttelton Museum is located just a couple blocks from the ship and highlights the history of shipping in that area.

Christchurch is known as New Zealand's "most English" city. It is an interesting mix of new and old. Princess offers tours of Christchurch Cathedral, Canterbury Museum and several art galleries. Our tour was the International Antarctic Centre where we were able to experience what it’s like in the Antarctic - see, touch and feel what it takes to survive  the South Pole. This was a great experience!

Dunedin - Dunedin has one of New Zealand's loveliest harbors. The city is called the “Edenburgh of New Zealand” and the residents are proud of their Scottish heritage. Bagpipe bands play as the ships arrive and are found throughout the town. A statue of Scot poet Robert Burns (author of Auld Lang Syne) is downtown along with New Zealand's only kilt-maker and a whiskey distillery.

We toured the Larnach Castle, a neo-gothic estate, which has spectacular tower views and beautiful gardens. The Dunedin Train Station is a landmark that features a Victorian fascade, beautiful tile floors and  etched glasswork. Also worth seeing are the Botanical Gardens, established in 1863, which feature rose, camellia, rhododendron and native plant displays.

On the morning we sailed to Milford Sound, the fog was very heavy. It was impossible to see anything. The Captain announced that he was hopeful that we would be able to enter.  As the ship made its turn into the Sound, the fog lifted as if it was opening a gateway into paradise. The Sound was totally clear of fog and the view was stunning.  We returned through the fog as we exited the Milford Sound later.

Hobart Tasmania, Australia - Our next port of call took us to our first stop in Australia.  We sailed into Hobart which is the capital of Tasmania.  Much of this city’s heritage is centered on the historic waterfront.

Our day in Hobart was spent at Bonorong Conservation Park -Something Wild. This park is dedicated to rehabilitating and releasing Tasmanian’s injured and orphaned animals. With one of the largest kangaroo and wallaby free-ranging refuges, Tasmanian devils, koala bears, platypus, wombats, wallabies and golden possums, this was a great opportunity to touch and photograph many of these unique animals. Port Arthur, once Australia ’s largest penal colony with nearly 12,000 hardened  British convicts is now a UNESCO World Heritage Site. Other  excursions Princess offers are Mount Field National Park, Salamanca Place and Bruny Island.

Melbourne, Australia - Our last port of call was Melbourne, Australia. Melbourne is a sprawling city offering culture, art, fashion and friendly, sport-minded Australians. Located in the heart of the city, the Golden Mile is where its governmental and commercial center, hotels, shops, restaurants and theaters are located. Princess also offers excursions to Sovereign Hill, Federation Square and the Queen Victoria Market.

Sydney, Australia - Sydney was our debarkation port. The harbor is in the heart of the city. Harbour Heads is said to be the most beautiful harbor in the world. We agree. The world-famous Sydney Opera House and the Sydney Harbour Bridge seem to be right alongside the ship.

We chose to spend two additional nights in Sydney with a Princess post-cruise experience. One our first day, we toured the Sydney Opera House. This masterpiece of modern architecture is a symbol of both Sydney and Australia . It has earned a reputation as a world-class performing arts center and is a UNESCO World Heritage Site. We also toured the Sydney Harbour Bridge. The locals nicknamed it the “coat hanger”. It is the world’s widest, long-span bridge and tallest, steel-arch bridge.

On our last day in Sydney, we traveled to the famous Blue Mountains. Its' sandstone cliffs were once believed impassable. We toured the ancient ravines, lush forest and beautiful waterfalls. We stopped briefly at the Featherdale Wildlife Park - one of the country’s largest, private collections of native Australian animals in their natural settings.

If you can, allow yourself even more time in Sydney before flying home. There is so much more to experience than what can be done in just a couple days.

A 12 day cruise on the beautiful Sapphire Princess is an excellent way to experience the unique wonders of Australia and New Zealand.