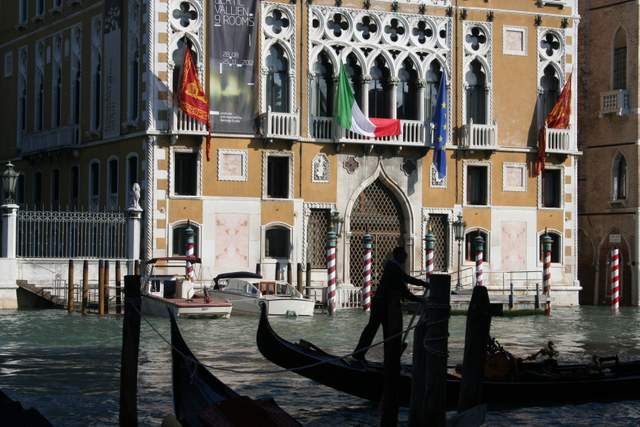 
MSC - the Mediterranean Shipping Company - prides itself on its international vibe. It has good reason to do so, MSC is the most  popular cruise line in Italy, South Africa and Brazil.

The MSC Musica launched in  2006 with Sophia Loren - "the ambassador of elegance worldwide"  - as her godmother.

The MSC Musica is a ship designed with brass, mirrors, marble and Italian flair. She has been describes as a "perfect blend of  tasteful design, elegant ambiance and sparkling entertainment venues," where "guests from around the world will enjoy the  cosmopolitan atmosphere, recreation facilities,and the fine cuisine whether Italian or from a selection of international specialities."

The MSC Musica's boarding process in Venice was very well done. This is quite a feat considering the challenges of working with  passengers who speak multiple languages. We were ushered onto the ship relatively quickly and our cabin was available for us  immediately. Lunch was already being served in the buffet for arriving passengers.

Our cruise began in world-famous Venice, Italy. Venice, known for its artistic and architectural accomplishments, is on many  people's Bucket Lists because there is no other place quite like Venice and has a history that is impressive as a world trading  power for many centuries.

We chose to arrive several days prior to the cruise and enjoy Venezia at our leisure. We booked a suite in the Hotel Bologna in  nearby Mestre ( meh STRAY) which is just a 7 to 8 minute train ride into Venice.  Four one-way tickets cost us less than 5 Euros  total and we did not have to deal with parking or traffic issues at all. The seats on the train from Mestre to Venice are comfortable  and clean. Tickets can be purchased at the station or in the Hotel Bologna at front desk. Read more about Hotel Bologna in our article at http://www.familytravelersmagazine.com/best-western-hotel-bologna---mestre-italy.html

Remember to pick up a map of Venice before you board the train. There are free Venice Tourist Maps in the Hotel Bologna lobby  near the computer stations. If you wait until you get into Venice to look for a map, you will have to pay around 3 to 5 Euros for a  map and most vendors will not accept a credit card.

We had booked two Venice tours - a walking tour and a boat tour - but we started our sightseeing ourselves by wandering the side  streets and neighborhoods most tourists do not see. Venturing off the standard tourist path allowed us to see the real Venice  where people still live, shop, and hang their laundry out their windows.

Our walking tour was offered by Avventure Belliseme. It began on the waterfront in the Royal Garden just a short stroll to St. Mark's  Square. Our guide was energetic, knowledgeable and full of happy smiles. The tour included a radio receiver and earphone for  each participant. Our tour guide had a small microphone. Her words were broadcast to our receivers so that we could hear her  instructions and descriptions even in the noisiest areas.

Our tour guide led us through large open piazzas, main streets and even hidden alleyways barely wide enough for our shoulders.  She stopped often to clearly and fully explain the canals, religious structures, architecture, sculptures and history of Venice. Her  tour was both educational and enjoyable. The tour included entry to St. Mark's Basilica.

Our guide also explained how Venice is built on pilons driven into the muddy sea bottom. Wood and stone are layered on top, layer  by layer for each building. The main foundations of the buildings are actually wood because of the need for light architecture on  the pilons and mud. To enhance the wooden structures, plaster (?) casts and statues were placed on the outside of each building  to give the appearance that the buildings were made of marble.

For the two days before our journey to the city, Venice had flooded. Many streets were under 3 feet of water. By the time we arrived,  the water had receded but was still 3 to 4 inches deep on some streets during high tide. Many people chose to wear rain boots to  keep their feet and pants dry. At St. Mark's Square, the water was at least 4 inches deep but the local government sent out workers  to erect temporary raised wooden sidewalks for tourists to walk on.

We also enjoyed the Avventure Bellisme Canal Boat Tour. The tour began at the Royal Gardens where our tour guide introduced  herself and gathered a group of 8. We walked a few yards to the waterfront and boarded a stylish motorboat with both open and  covered seatng options. We chose the open-air seating which allowed us ample opportunities for photographs. The guide and  boat driver took us through and around all five districts of Venice. It was an excellent way to view the city from a different  perspective. We had seen it from the streets during our walking tour and now we saw it from the water. The boat tour gave us a  much better view of many of the incredible homes of Venice's wealthy residents - some of whose families have owned those very  homes for almost 1000 years.

Our first port of call after departing Venice was Bari on Italy's southeast coast. Bari is the home and burial site of St. Nicolas for  whom Santa Claus is loosely based. One of the stops on our tour was to the Tomb of St. Nicolas where local residents still  gathered to pray even today. The Church of Saint Nicolas is Bari's top tourist attraction. It was built in 1087 to house the saint's  remains.

One of the most interesting sites in Bari to us was the Castello Svevo fortress located just minutes from the cruise port. The high  stone walls are still impressive and foreboding and the moat, though it is now dry, is a reminder of the battles fought over this land  for many centuries.

Castello Svevo was originally constructed in 1131 and was renovated in 1233 by Frederick II. In the sixteenth century, Isabella of  Aragon transformed the castle into a "royal residence."

While strolling Bari's streets, photographers will enjoy the Teatro which was built in the early 1900's and has a beautiful facade that  can make a great photo opportunity.

The city has a very modern shopping and business section and heavy traffic. There are storefronts and restaurants everywhere.  There are several marketplaces where you can souvenir shop not far from the cruise port.

We docked in Katakolon, Greece today and rode into Olympia - the site of the very first Olympics. It was an incredible place to visit  and a dream come true. I touched stones that had been touched by the ancients. I saw a building ruins that had been dedicated to  Spartan King Leonidas. I saw body armor worn in ancient battle. It was a wonderful day.

Olympia is about 35 minutes by bus from Katakolon. The ride is interesting as you pass homes, businesses and olive fields.

The ruins at Olympia are very accessible and therefore it is wonderfully easy to reach out and touch the same stonework that the  ancients ones touched.

The site of the first Olympic running race is now a barren plain in a grassy field. Visitors are invited to run the track themselves for a  unique photo opportunity.

An indoor museum is also on the grounds. It houses an impressive collection of Greek statues, body armor, shields, helmets and  small figurines.

Santorini has been called one of the most beautiful cities in the world. We agree! It is simply stunning.

The city sits on the top of cliffs that drop 1000 feet to the sea below. The rounded roofs and exterior walls of the homes flow from  one to the next in a dazzling array of whites, yellows, blues and pinks. For photographers and painters, Santorini is a dream come  true. There are stunning scenes at ever turn of the winding pathways running between the homes and along the face of the cliffs.

There is no pier at the bottom of the volcanic cliffs so cruise ships that visit Santorini must use tenders to ferry passengers to  shore and back to the ship. Once you reach the shore, there are several ways to reach the top of the 1000 foot cliffs - 1) you can  take a bus 2) you can walk the winding street upward that looks like a neverending "Z" 3) you can rent a ride on a burro 4) you can  take the cable car for a speedy and scenic ride.

However you decide to ascend the cliffs, you will be rewarded with some of the most stunning views on the planet.

Piraeus is one of the largest ports in the Mediterranean Sea and one of the busiest ports in the world. It is the gateway to Athens.  Be warned - any venture into Athens is time consuming. The traffic is some of the most congested in the world. After an arduous  journey to Athen's city center with a stop at the Olympic Stadium , we arrived at the base of the Acropolis.

We climbed 150 steep and slippery steps to the top of Acropolis Hill which houses the Erectheum, The Temple of Wingless Victory  and the Parthenon.

Photographers will love the views offered of the Parthenon, the surrounding city and other nearby ruins.

Lovers of history will enjoy seeing the touching these world famous and ancient ruins that have survived the ravages of war and  conquest.

We also visited the Acropolis Museum which houses statues, sculptures marbles of the Parthenon. Photos are not allowed in the  museum. Security personnel will force visitors to delete any photos taken inside the building.

We enjoyed a scenic drive through the countryside to the Palaiokastritsa Byzantine Monastery which was founded in the 13th  century and offers fantastic views of the Ionian Sea.

Monks still inhabit the small cells today and dozens of cats roam the grounds begging to be petted.

At the base of the mountain that houses the monastery, we found a beautiful beach at the Bay of  Palaiokastritsa. The water contained incredible shades of teal and green.

Locals offered small boat tours to the caves that dot the waters edge.

Back in Corfu, we enjoyed a walk through the historic downtown area that is filled with dozens of sidewalk cafes.

We watched  local residents played a game of Cricket on the park lawn before we entered the seaside walled fortress that once protected the city against invaders.

Our ship docked at the Dubrovnik Pier. Dubrovnik is known as the "Pearl of the Adriatic."

The city was founded in the 7th century and its world-famous walled "old city" was built in the 12th  century to defend the city against its many invaders. The city was highly valued for its strategic trade location.

Dubrovnik's city  walls are considered the best preserved of any in Europe and some have called them the most beautiful as well. The city was  declared a UNESCO World Heritage site in 1979.

We enjoyed a leisurely stroll through the old walled city with its ancient water fountains, its outside vegetable / farmer's market, and many restaurants and souvenir shops. The old city is filled with Gothic, Renaissance and Baroque churches, monasteries, palaces and fountains.

Unlike many of its European  counterparts, Dubrovnik readily accepted most currencies and credit cards.

We enjoyed our Mediterranean cruise aboard the MSC Musica.

Cruising on MSC Cruise Lines is a unique cultural experience and international adventure that you will not find on other lines.