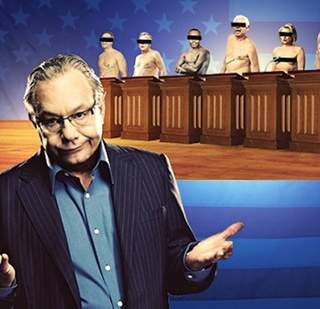 Lewis Black
​
What comedy's King of Rant told us about Florida, the election, comedy and gay marriage

Lewis Black has been lovingly called the King of Rant. Why? Because his manic finger-pointing and frothing-at-the-mouth yelling somehow says all the things we wish we had the nerve to say out loud about current events, social media, politics and the absurdities of life.

Who is Lewis Black?
* He earned degrees from University of North Carolina and Yale Drama School
* He performed eight Sold-Out shows on Broadway
* He was the playwright-in-residence at the West Bank Café’s Downstairs Theatre Bar in New York City
* He is a two-time Grammy winner
* He is an Emmy winner
* He's written three best-selling books and 40+ plays
* He voiced the character “Anger” in the Academy Award winning film “Inside Out”
* He worked with University of North Carolina students to create the annual Carolina Comedy Festival that provides workshops and lectures for budding comics, writers and performers

We asked Lewis Black several questions about his life and his upcoming show at the Maxwell C. King Center for the Performing Arts in Melbourne, Florida.

What's the best thing about touring through Florida?

The sunsets. The fresh fish. The beaches, especially the ones that aren't well known and I'm not going to tell you where they are - you have to find them. And the fact that you're just visiting and can do what you wish and you don't have to live there. Sorry I couldn't live there.

How has the 2016 election affected your material?

It's tough to make funnier what is already funny. These folks are doing all the work for me. I'm not sure what my job is anymore.

What can a first-time audience member expect from your show?

Unbridled joy and happiness. They hopefully will find out that they aren't the only ones who felt they've lost their minds over the last year. And a lot of laughs.  Also they can expect to be treated as if they are intelligent, because they are intelligent, even though their leadership doesn't seem to think so.

How much do you love / enjoy what you do for a living knowing that people love your comedy?

I'm incredibly lucky or blessed, if you will, to have an audience that comes out to see me night after night. I can't even describe how much I love it. It's an extraordinary amount of joy I get from performing.

We have a large LGBT readership, what do you think of the never-ending, religious-freedom political attempts to circumvent marriage equality?

I think it's insane.  As I said fifteen years ago, on the list of things we have to worry about, gay marriage is on page fifty, after "Are we eating too much garlic as a people."

You can learn more about Lewis Black at https://www.lewisblack.com/

Black will appear at the Maxwell C. King Center for the Performing Arts in Melbourne, Florida on April 10, 2016.

You can visit the Maxwell C. King Center for the Performing Arts website at http://www.kingcenter.com/