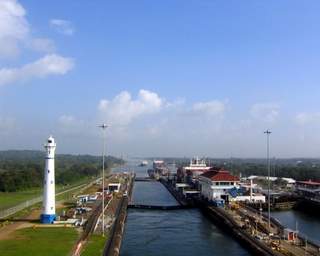 
We enjoyed every minute.

The ports of call include -
Half Moon Cay is Holland America's private island. There are many enjoyable things to experience while during your day here.  Boating, horse back riding, swimming with stingrays, hiking and biking are all popular ways to start your cruise vacation. They also offer underwater activities, parasailing, cabana rentals and a glass bottom boat trip. We chose to wander the island with our cameras taking gorgeous shot after gorgeous shot of the tropical plants, white-sand beaches and beautiful, teal blue waters. The crew served a filling barbeque lunch on the island for passengers.

Grand Turk is the capital of Turks & Caicos and has been the government seat since 1766! The island is just 6 miles long and 1 mile wide. It is rated in the Top 10 dive destinations in the world because just 5 minutes from the shore is the famous 7000 foot vertical wall. Popular excursions include Conch World, snorkeling, diving and swimming with the stingrays. Margaritaville offers a huge pool that has swim-up bars for those passengers who just want to have a drink, relax and stay cool in the pool.

Oranjestad, Aruba is always one of our favorite stops.  Dark blue seas crash onto rocky shores that surround a beautiful, desert-like interior of statuesque cactus, huge boulders, and natural bridges.  On this trip, we chose an island tour which included the California Lighthouse, the Ostrich Farm and a stop to see the wonders of their stunning beaches. Popular excursions include the Atlantis submarine Underwater Adventure and Shipwreak Exploration jeep tours, four-wheeler tours and bus tours to local highlights. Always make time for an enjoyable walk around the city which is literally  right at the port.

At Santa Marta, Columbians began to entertain us before we even left the ship. Dancers of all ages in colorful, native costumes preformed traditional dances at the port adding to the excitement of our arrival.  We chose the City Tour and Folkloric Show as our excursion. It offered interesting sites, native dancers and opportunities for great photos.

The island of San Blas, Panama is famous for its' native people selling their hand-made molas. Molas are colorful, hand-sewn creations that are popular with tourists as pillow cases or wall hangings. The history behind the molas is most interesting. The inhabitants of the islands originally wore no clothes. They painted their bodies with colorful designs. When missionaries came and discouraged their nudity, the natives created their brightly colored molas to match the body painting they had used before. With the sun-lined faces and brightly colored clothes of the island natives, this is another great place for photographers. Be sure to note the local restroom. It is a hut, placed at the end of a pier over the water. There is no plumbing, just an open hole to the water below!

The Panama Canal is an engineering wonder. It is a man-made 48 mile trench dug into the jungles of Central America in order to connect the Atlantic and Pacific Oceans. Nearly 15,000 vessels transit the canal each year. Ships are pulled by locomotive into locks, the water in the locks is raised or lowered as needed for the ship to pass to the next lock. Traversing the Panama Canal is an all-day process.  It is wise to get up on deck before the sunrise for a good seat as almost every passenger on the ship comes out that morning.  A guest speaker / historian is usually on hand  telling everything you need to know through the ship's public address system.  There are many native creatures that can be seen along the way and the sounds of the wild parrots give you the feeling you are in the middle of the jungle - which you are!

The skyline of Panama City, Panama looks similar to the Miami skyline. Skyscrapers seem to rise right off the beaches themselves. Founded in 1519, Panama City is where most gold and silver passed on the way to Spain after Spanish conquerors took the treasures from the native peoples. Today, Panama City is home to over a million residents. The city contains everything from skyscrapers to ancient fortresses to Spanish colonial buildings to French townhouses. The Old Quarter of the city has numerous tourist attractions.  Las B’ovedas, a waterfront promenade jutting out into the Pacific is where natives sell their crafts, and sing and dance to entertain you as you stroll along. If the balcony in this photo looks familiar to you for some reason, it may be. Local tour guides claim that scenes from a recent James Bond film were shot on this balcony.

The port at Manta, Equador, provides a very educational view - tuna ships unloading tons of frozen tuna into large freezer trucks to be shipped to other parts of the world. Manta is known for the famous Panama hats (which surprisingly are made in Ecuador not Panama). We noticed very quickly that very few, if any, natives of Manta were wearing the Panama hats they sold to the tourists. We visited the village of El Chorillo where workers specialize in crafting with agave fiber.  We also visited a factory where carvings are made from tagua - a cream colored nut that looks like ivory.  Another popular tour was Montecristi - a colonial town founded in 1628.

Trujillo & Salaverry, Peru was the next port of call. The main point of interest here are the ruins of the archaeological Trujillo site. The two hour bus trip to the site is long but interesting along the way. We were all surprised and then grabbed our cameras as our bus was passed by a van with three live sheep tied to the roof! Homes in this arid area have little or no roofing because it seldom rains. Woven mats served as roofs for many native dwellings we passed. The archeological site contains a huge pyramid-like structure still partially buried in sand. Armed guards stood watch, protecting out tour group the entire time. The site contains interesting and graphic ancient paintings of naked captives being led off the execution. Another popular excursion is Huaca Dragon Temple and Chan Chan complex, the capital of the ancient Chimu Empire.

Lima, Peru is where passengers can leave the cruise for several days to travel to Cuzco and Machu Picchu. We chose to tour Lima on our own with several friends. Our group consisted of two Americans, a Canadian, two Scots and a French woman. We stepped off the ship, hired a waiting van and asked our driver what he recommended we should see. He took us into the Main Square where the Government Palace, Town Hall and Bishop’s Palace are located. He dropped us off and promised to pick us up in two hours  The changing of the guard was taking place at the Government Palace which added to the excitement of our visit.  There were many shops and art pieces to enjoy making our visit to the Main Square very enjoyable. If you are not comfortable exploring on your own, Holland America offers a variety of excursions.

Guayaquil, Ecuador was founded in the 1530's and it is the country's largest city and main port.   The ship offered excursions to the Guayaquil Historic Park, the Orchid Greenhouse and many local historic sites. We enjoyed observing the rugged, hand carved boats the native people used for their transportation. Attractions include the Metropolitan Cathedral originally built in the 1500's, the Malecon Pier, the Parque del Sentenario monument park, and the Barrio Las Penas which is the oldest area of the city.

The port at Puerto Caldera, Costa Rica is at the base of a lush, green rainforest. We chose a boat and train trip through the rainforest giving us a chance to see the homes of the native people's and the local animals that inhabit the jungles. The train trip was made even more interesting by the native children who ran out of their homes to smile and wave at us as we passed by. Other excursions offer Coffee Plantation tours, canopy tours, an aerial tram, a zip line and the Eco Tropical Mangrove River Cruise.

Puerto Chiapas, Mexico was built with cruise ships in mind.  Just steps from the ship is a bar with a large swimming pool which is enjoyed by both passengers and ship's crew. The port has a large, open-air building where dancers perform in a sunken stage. We chose the Izapa Chiapas Ruins and Tapachula City tour. The city tour was enjoyable because they were having a family-day in the town square with games and activities for the families of that area.  We saw a lot of smiling children. The Izapa Chiapas Ruins are not as impressive as the Palenque Chiapas Ruins (which are incredible). The Izapa Chiapas site was inhabited from about 1200 BC to 100 AD. Today, it consists mainly of stone steps of various sizes and heights.

Huatulco, Mexico is another port built specifically to accommodate cruise ships. We chose to take a Catamaran with swimming in five different bays. Our catamaran ride was enjoyable and the views were fantastic from bay to bay. Passengers enjoyed complimentary margaritas starting at 9 a.m. When the captain announced opportunities to swim, passengers eagerly jumped and dove off the back of the boat into the crisp, clear water. Another popular excursion was the Bird Watching Eco Adventure where you can observe over 227 bird species.

The port at Acapulco, Mexico is located in the heart of the old city where you can easily walk and explore the streets and shops. As you leave the terminal, be prepared for aggressive taxi and tour operators waiting outside the door. Acapulco is famous for the skill and precision of the world famous Clavadistas cliff divers. There is a fee to view them and a second fee to ascend to a better viewing deck. Acapulco  Highlights is a popular excursion that includes the famous Palace Hotel, the Black Lagoon where the Tarzan movie was filmed, the old and new parts of the city and the cliff divers.

The last port of call, Cabo San Lucas, Mexico requires a tender. Former Van Halen frontman Sammie Hagar has a home here as well as his Cabo Wabo Cantina. There is a lot to see and do at the port. We got off the ship on the first tender, walked around the port and found a small tour boat offering tours to see the seals up close.  We were the only two on the entire tour boat! The operator  took us to the iconic rock formations jutting up from the ocean where the bay connects with the Pacific Ocean and guided his boat to within feet the hundreds of seals sunning on the rocks. This was a great experience. There are tours available for scuba diving, snorkeling, a semi-sub underwater explorer and a glassblowing factory. Cabo is famous for whale watching. As our ship was leaving the port, whales began following us and then swimming alongside us. Soon after that, our ship was surrounded as far as the eye could see with jumping dolphins.

The MS Statendam was one the most friendly ships we have ever been on. The captain was constantly interacting with the passengers as well as the other staff members.  On the day we crossed the equator, he held a special ceremony was held on the rear deck around the pool. Staff and crew members who were crossing the equator for the first time had to kiss a huge fish and lay on a table and allow themselves to be painted from head to toe with spaghetti, paints and other foods by other crew members. It was an excellent way to entertain passengers on that particular at-sea day.

This MS Statendam holds 1260 passengers and has a crew of 580.  It has recently been enhanced with the latest signature-of-excellence features and amenities, remodeled public spaces, updated lounges and an exciting new entertainment area called "Mix featuring three distinctly themed bars providing the ultimate place to socialize and be entertained."