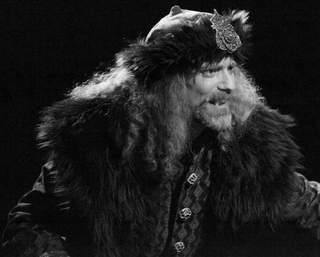 In 1897, Bram Stoker introduced the world to the undead, bloodsucking villain Dracula. In the 1920’s, Hamilton Deane and John L. Balderston brought Dracula to the stage. Today, director William McNulty has adapted the horror story for a modern audience and the production has become one of the highlights of the year for the Actors Theatre of Louisville.

Performed in-the-round, there isn’t a bad seat in the theatre. It is a credit to the actors and McNulty’s direction that so much action is produced on such an intimate staging.

Dylan Chalfy portrays the Transylvanian Count Dracula. Chalfy’s Dracula seems to seethe with disdain for the mortals around him. He knows without a doubt that they are no match for his physical powers and mystical abilities.

Director William McNulty does double-duty as the aged Professor Van Helsing who risks his life to challenge the evil, undead Count. McNulty is an Actors Theatre of Louisville audience favorite for good reason. From his stooped walk to his furrowed brow, McNulty perfectly embodies the weary and seemingly overmatched but determined Van Helsing.

The production is filled with special effects. Fog rises from the floor. Dracula leaps onstage from the audience. Bats fly over the audience. Guns fire and more.

We enjoyed every moment of “Fifth Third Bank’s Dracula” at Actors Theatre of Louisville. We highly recommend it as an annual part of your Halloween schedule.

For more information about things to do in Louisville, visit www.GoToLouisville.com